Designed in 2002, doubled in size in 2005 and further widened in 2011, MiCo MilanoCongressi is among the largest conference facilities in Europe and worldwide, catering for up to 18,000 people in 70 or so fully equipped conference rooms with permanent control booth.

Featuring two plenary rooms, seating 4,000 and 2,000 respectively, and an auditorium seating 1,500, it is the ideal venue for large-scale events and for international conferences requiring a large number of rooms.

The exhibition halls offer 54,000 square meters of exhibition space and can also be set as plenary rooms, accommodating more than 5,000 people.

All of this in downtown Milan, with a parking lot for more than 1,100 cars, a service heliport and direct access to the new, soon-to-open subway line.

The Hotel Campion is located a few steps away.

How to reach us 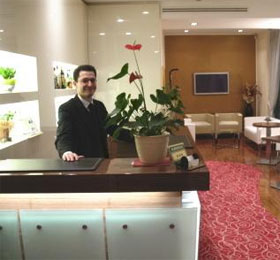 We use cookies on this site to enhance your user experience
We may also use cookies from a third party to track the visit to our site. By clicking any link on this page you are giving your consent for us to set cookies.